As foldable and wearable displays start reaching the market, these devices will have to be able to bend without cracking.

New generations of electronic devices are demanding new functionality in display materials. While traditional displays have been rigid and non-interactive, new displays will be highly interactive as well as flexible, foldable and even stretchable. This is generating unprecedented opportunities for new advanced materials.  Silver Nanowire-based inks and films are emerging as the dominant candidate to replace indium tin oxide (ITO). 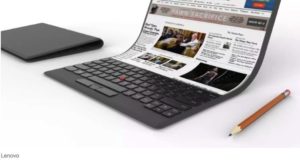 Figure 1: A laptop prototype with a flexible display. (Source: Lenovo)

In this article, we’ll look at the limitations of ITO in meeting future demands for display materials and see how silver nanowire-based films are being adopted and gaining significant traction.  ITO and other brittle metal oxides are the preeminent transparent conducting materials in a wide variety of applications from smartphones and tablets to touch sensors, OLED lighting, OLED displays, EMI shielding, smart windows, E-paper, LCDs and solar cells (see figure 1). However, these applications have conventionally been planar and rigid.

Foldable and wearable displays are starting to hit the market, and with the adoption and expansion of 5G and the “internet of things” we can expect rapid growth of flexible electronics. These devices will have to be able to bend without cracking, and to withstand hundreds of thousands of bend cycles.

For applications like the one shown in Figure 1, engineers and scientists are developing their flexible, lighter-weight, and more conformable applications like foldable phones, more ergonomic wearables, flexible displays, shielding layers, and solar cells, which require a more robust and flexible transparent conductor.

ITO offers good conductivity, but it is brittle and cracks when bent or folded. Additionally, ITO exhibits limited transparencies at lower resistances, which are necessary for large-area interactive displays or smartphones that require sub-100 ohms per square.

As its name implies, a silver nanowire (also called AgNW) is an ultrathin and long filament of metallic silver. A silver nanowire with a diameter of a few nanometers (10−9 meters) is roughly 1,000 times thinner than a human hair. Thin films of silver nanowires can be coated or deposited onto transparent substrates and can form a conductive network. Since the nanowires are made from silver, electricity can pass through the wires and due of their nanoscale size, these wires also do not interact strongly with visible light, and much of the void spaces between wires also allow for light to pass.  The unique combination of high conductivity and high light transmissivity make silver nanowire based TCFs the leading contender to replace ITO.  Nevertheless, there are other materials such as metal mesh, carbon nanotubes, copper nanowires, conductive polymers and graphene, all of which are being considered as potential replacement candidates. Metal Mesh, which is a grid formed by micron (10-6 m) metallic conductors can offer very low and attractive resistances, but often suffers from several optical issues due the relatively large size of the metallic grid and its regular geometric pattern.  Other materials like carbon nanotubes and graphene are mechanically robust but have much poorer light transmission when compared to ITO or silver nanowire based TFs. Overall, silver nanowire-based TCFs offer the best overall material in terms of flexibility, low resistivity, and better transparency. Moreover, silver nanowire-based solutions have been developed for years, have several design wins, serial production and are in full-scale manufacturing today.

To summarize, in comparison with ITO, silver nanowire-based materials offer: 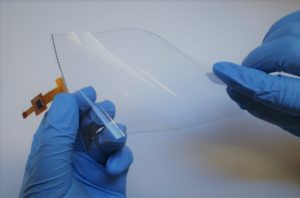 The Future is Flexible

As the display industry evolves from static to flexible and highly interactive, the materials used to create those displays must also evolve. Silver nanowire-based materials deliver the optical quality, conductivity, flexibility, manufacturability and low costs required of the next generation of flexible displays.